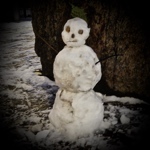 Now with the time spent in San Francisco and New York behind us and our bodies somewhat 'cooled down' from our normal Sunshine Coast warmth, we headed for our White Christmas rendezvous with Santa in Helsinki. Those US cities had been fun but it was time for a change of scenery and what was anticipated to be some seriously cold weather, at least to us.
Our flight took us through a transit stop in London but even with that disruption all went well. British Airways were brilliant and the accent change was a delight along with some great humour from our cabin staff. This together with their amazing ability to push plenty of free wine our way made our day.
And all was good.
The lack of heavy snow in the US seemed like a thing of the past as we looked over Finland's brilliant white landscape on the approach into the Capital. Unfortunately that was not to be in the city although the minus one to plus two temperatures did keep our toes curled up inside our shoes.
There may not have been a snowy welcome awaiting us in Helsinki but we did receive something more meaningful. Special friends from home, John and Gayle, had flown over to spend the 'silly season' with us and they were ready to party. Things were definitely on track.
With that in mind the plan to have Xmas in Helsinki, New Year's in Saint Petersburg and a rest up in Tallinn was now set in motion although Davey did stuff things up a tad by picking up a flu-like bug along the way. There's just no hope for the old fella but a few stiff Finnish gloggs, or similar, were considered.
And all would remain good.