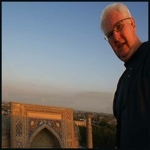 On September 25, 2008 I and 18 other spirited travelers embarked on a 30 day journey through Iran, The Caucasuses and the five former Soviet Stans. For me, this was the second leg of what I fondly refer to as my "2008 Axis of Evil Round the World Journey." The entire trip lasted five months and took me from Washington, DC to North Korea.

This journal focuses on the above mentioned Central Asian countries. All these countries contain sights that were central to the Ancient Silk Road. Thus, this was the theme of the trip. So, sit back and enjoy the tour. There are additional journals on this website that deal with other legs of the five month trip.

The picture to the left was taken atop a minaret in Sammarkand's Registan. The minaret I was standing on was almost identical to the one in the lower right-center of the image. There was only room for one person at a time at the summit of the minaret. Thus, I had to improvise and take this picture of myself when it came time for my three minutes at the top!